We can't believe we will be home in less than a week.  These last couple weeks have flown by and I feel like we have done so much travelling we could have covered the entire continent of Africa.  We made the journey down to Ivory Coast (15 hours in a van with 9 people). There was a leadership retreat for the church leaders in Ivory Coast that we were able to be a part of.  These people had just come out of over 10 years of crisis, so it was a time of refreshing for them.  Great people, awesome experience. 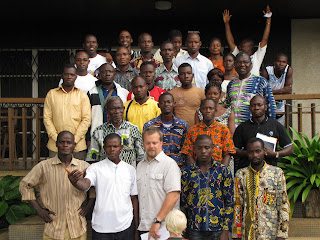 We also got to visit and observe at the clinic/lab that serves the people of Abengouru, Ivory Coast.  They have a great HIV/AIDS program going on there...the people that work here are amazing!

We also had our first overnight village stay in an area that a church plant was going to be happening.  We are so glad we got to make it down to Ivory Coast to see all that has been going on, admist the crisis.

So today we head to Dano for a team retreat...it should be a lot of fun to see everyone again.  Then we head to Ouaga on Monday and fly out Tuesday night.  See you all soon!!  Thanks for your prayers throughout this trip.
Posted by Martin's at 5:04:00 AM 4 comments:


So we are now in Banfora for the last leg of our journey.  It has been so exciting to see God moving here in Burkina.  At a short stop for a meal at a hotel, Landon was reading his Bible when one of the employees came up to him.  Emmanuel, the worker, asked Landon if he could have his Bible...he had wanted one in English but they are hard to come by here in Burkina.  Landon eagerly handed it over, and Emmanuel said, "When you give someone the gift of the Word of God, you give them everything." That pretty much sums it all up.

Life on the Farm

Life on the farm has been great and difficult at the same time.  I (Lori) wouldn't consider myself high maintenance but not having electricity has challenged me to say the least:) Pretty sure using the composting toilets has been the hardest part for me!  We have been living with the G family and they are so much fun!!  They recently just moved to the farm back in May and so it has been an adjustment for them as well.  They have 2 paid farm managers who live on the property.  The farm managers are from 2 of the local villages.  They are learning some new farming techniques that they can then teach their home villages.  One of the farm managers had been seeking Jesus for some time and within the past few years became a Christ follower after observing the G Family while living on their property.  He is the minority is this community.
So we have done quite a bit of planting while we have been on the farm.  We have worked in the nursery and planted beans, corn, and living fences.  We built a chicken coop with scraps of wood and have done a few village visits.  Yesterday we were able to go to one of the farm manager's villages.  The guys went and worked in the corn field while the women gave a Nutrition lesson on Hygiene and told a Bible story.  It was awesome to be a part of.  Once again the village fed us a meal (this time with no utensils) and we headed back to the village of Kangoura.
It is officially becoming rainy season, as it has rained and been overcast for several days straight now.  The temps are dropping finally and the roads become very sketchy as the rain erodes what is considered to be the road.  Life on the farm has brought interesting critters our way, including a spider called "Horse of the Scorpions" because it is big enough to carry scorpions.  There are also many snakes and fortunately we have only seen the ones that have been killed.  I prefer to keep it that way for the next few days!!  We also had quite the adventure in the kitchen with several mice.  Several of us (including Landon) were screaming and hollering as the cat hunted these mice.  We had to laugh when we noticed the farm managers wife standing outside the kitchen door wondering what these white people were doing:)
Hope everything is going well back home.  We will be back before we know it.
Posted by Martin's at 6:45:00 AM 4 comments:

Since it took over an hour to load the nine pictures to the blog yesterday, we didn't have time to comment.  Shannan, here are some explanations.

We had the privelege of helping in 3 water well rehabs.  It is much cheaper to repair the wells than drill new ones, so the family we stayed with the past week let us come help.  We visited two villages on Tuesday and we had no idea what to expect.  We arrived at the first village and within 10 minutes everyone from the village was standing around the well, singing praises to God for what was about to happen, and then the well rehab began.  The women sang for 4 hours straight, while the men repaired the well.  One lady convinced me to dance with her and I am pretty sure I looked silly but went with it.

The second village rehab was very similar.  The man who is over community development told us afterwards that he has had people come to repair wells in the past but charged over $9,000 each and so he was thankful for Living Water International who was part of the well repair funding.  He also mentioned that he would be telling all of the other villages that they need to follow Jesus (even though he is not a believer at the moment) because in the past he had only seen Jesus on the cross, but this day he had seen Jesus in us. (I HAD TO HOLD BACK MY TEARS).

The team we stayed with also particpates in a literacy program in the villages because many of the church members cannot read the Word of God.  They also train the leaders individually so they can be equipped to teach and church plant.  The Church among the Dagara people group is growing so fast and there are not enough people that can train these leaders...pray for people to be sent to this group so they can be soundly trained.

We head to the farm in the morning....we will take pictures and hopefully  post in a few weeks.
Posted by Martin's at 5:11:00 PM 5 comments: 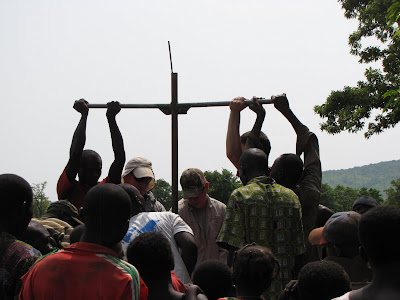 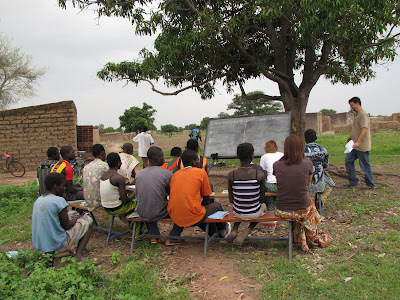 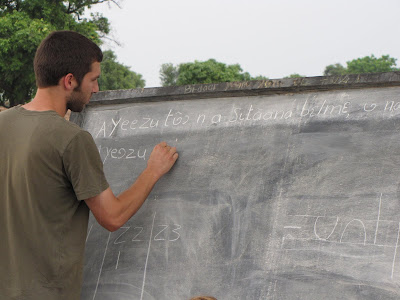 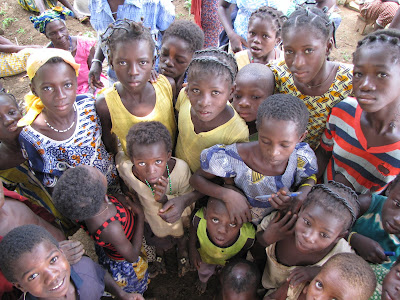 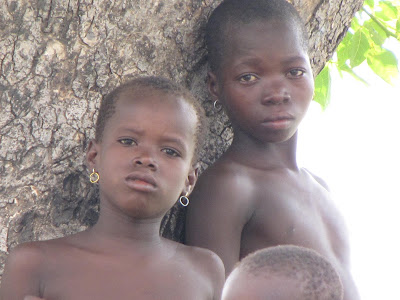 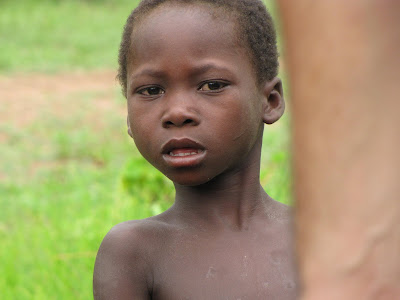 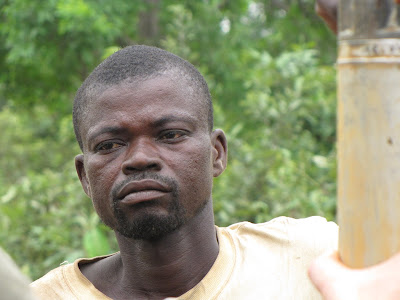 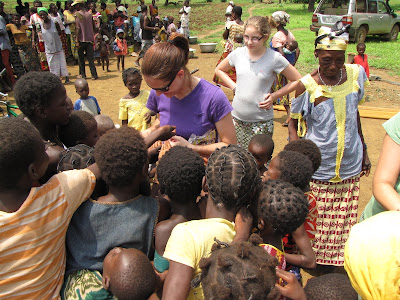 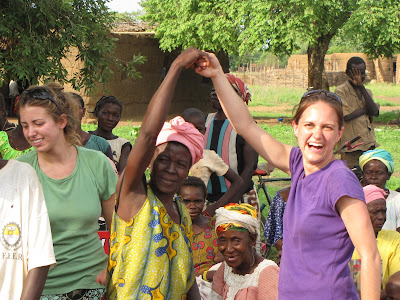 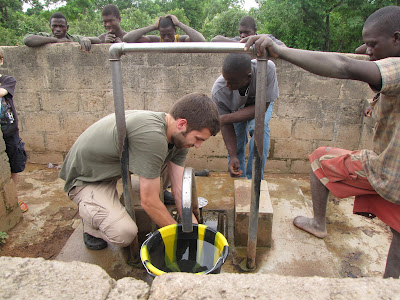 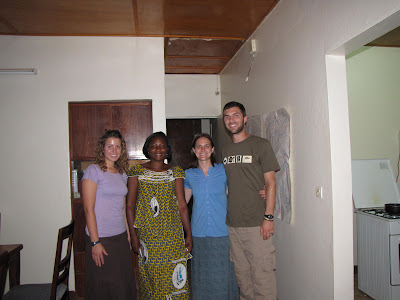 She pulled in on Monday morning at 9:00 am on her moto.  She was beautiful and strong looking, and she was to be our Dioula language tutor for the next week.  She spoke only French and Dioula (and a few English words) but somehow we have made it work.  She never begins our mornings without prayer, and then typically we do our Language Aquisition Plan and go over some basic conversational items.  Today was different, though.  Today, we got to hear this great lady tell her story about her Savior, Isa.
…Madame T grew up in a Muslim family in Cote D’Ivorie.  When she was 10 years old her dad wanted her to attend school in Burkina Faso but her grandmother insisted she stay in the home and help with the chores.  Since she was too old to begin school, her father found a way to make a few tweaks on her birth certificate so she could be a few years younger, and despite her grandmother’s wishes, she was off to live with her older brother in Burkina Faso to attend school.
It was when Madame was 12 years old that she said she finally met the “One True God”.  Her life up to this point she had never known the “One True God” but she gave her life to Christ that day when it became clear who Jesus was.  Her family quickly found out that she gave her life to Christ and came to Burkina in an attempt to sway her decision otherwise.  Even at the mere age of 12, Madame T said she finally knew her Savior, Jesus, and no one would ever be able to convince her to go back to her old ways.  Because of this, her family disowned her for many years, at the age of 12, for following Christ.
She counted the cost and it was worth it.
Madame T’s mother passed away a few years after this, so a wealthy family in Burkina that had been good friend’s with her parents would have Madame T and her cousin over for dinners and to help her along.  Madame T would tell them the joy she had from Jesus but they had no interest.  So Madame T began to pray they would encounter Jesus.  She would pray for them at their gate before entering; she would pray for them before she ate meals with them; she would pray each time she thought of them.  For nineteen years, she prayed for this family to know Christ.  Not too long ago Madame T got a call.  It was this family letting her know they encountered Jesus and decided to follow him.  The husband, his two wives and all of their children are now following Christ.  Madame T’s persistent prayers were heard!  These people too had to leave everything they knew for the past 60 years so that they would have eternal life in Jesus Christ. A small sacrifice for a God that is worth it.
Madame T went on to marry a pastor and now teaches women here how to cook on solar ovens.  She has also worked on microfinance projects, has helped get low cost meds out to the people that need it, served in clinics, and does just about everything else a servant would do.


At the end of her story, there was nothing better that we could think of doing than praying to our Father in heaven for loved ones and friends who have not experienced the freedom, healing, hope and salvation in Christ that we all have found.  We know God heard the prayers we said, prayers in Dioula, French and English.  Our God is a big God.


Here's just a few pics from the past 2 weeks!

Ephesians 2:8
For it is by grace you have been saved, through faith--and this is not from yourselves, it is the gift of God--not by works, so that no one can boast.
Ani Wula!  Today we began language learning with Madame Toé. We have language lessons with her for three hours a day and then spend the afternoons on a language route. Most people speak French, however the primary people group that we are working with speak a language known as Dioula.  This morning we literally did not know a single word in Dioula and then this afternoon we were rooming the streets attempting to have conversations with people we encountered.  Please know....I use the word conversation very loosely!  It was exciting to meet new people today: Marguerite, Antwan, Awa, and many others whose names were basically impossible to pronounce with our limited American tongue.
Praises:
Prayer Requests:


We tried to upload more pictures, but we are having an extremely slow internet connection so hopefully more will come!
Thanks for your prayers and support!
Posted by Martin's at 3:18:00 PM 3 comments: